← more from
Stonetree Music
Get fresh music recommendations delivered to your inbox every Friday.
We've updated our Terms of Use. You can review the changes here.

Carnival of the Ghosts 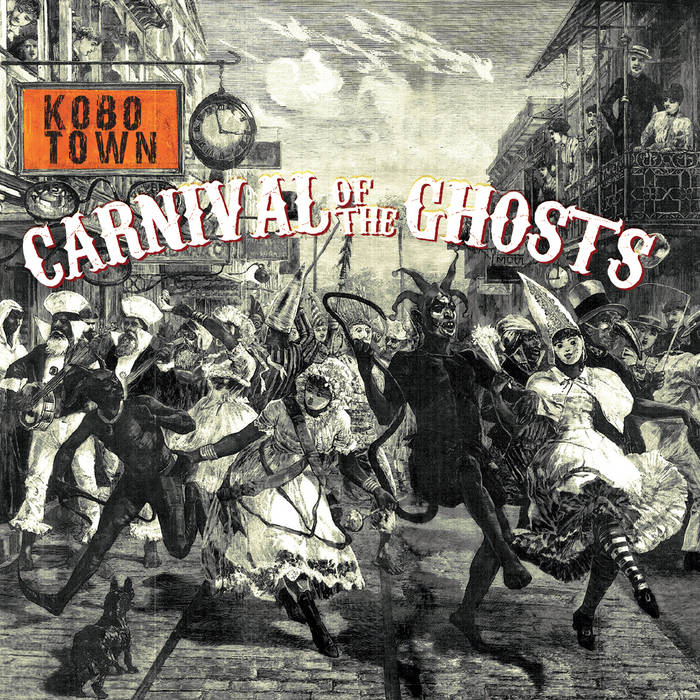 Kobo Town continues to redefine calypso music and pushes the boundaries of the Caribbean sound with its fourth album, CARNIVAL OF THE GHOSTS.

Behind the running social commentary and satirical mood, this is a collection of songs about the human condition – about our quirks and foibles, our anxieties and hopes, and the haunting sense of impermanence that imbues our every moment with its urgency and priceless worth.

A few years ago, I was riding the metro in Paris to a recording session when at one stop an old fiddler stepped into the subway car and regaled its passengers with a medley of rousing tunes.  He played his jigs and reels with great technical dexterity and a tasteful dramatic flair, dancing and tapping his feet all the while.  For all his effort and ability, no one even looked up.  In fact, so completely was he ignored, that he seemed to me like a ghost out of the past.  I imagined that in his grey cap and overcoat, that he was indeed a spirit come back to playfully tease us out of our dull and joyless modernity.  Then again, I pondered, maybe he was indeed the living man, and we the shades lurking in the dim self-absorbed Hades of our own making – in a place as devoid of purpose as it is of pageantry.  Now, this may be a very unfair takeaway – perhaps it was familiarity which left the old fiddler without an attentive audience and the underground commuters were hearing this particular tune for the thousandth time.  Whatever the case, the contrast between this smiling, dancing fiddler and the lifeless crowd of us on that subterranean train made me think many thoughts:  of the sense of wonder and how easily it fades among the worries and cares that beset us all; of how important it is to rekindle it and to remain open to the spontaneous moments of grace which will intrude upon the fixed habits and routines of our lives if we will only let them.

While much of my writing has been inspired by the history that has shaped the Caribbean and its diaspora, leaving its marks and scars and in all our manners and doings, this album takes a wider look at our human condition - here the lingering past is not just beneath the surface of the present, it is also something we are all quickly becoming a part of.  Some of the songs offer a running commentary on our quirks and foibles, about the misuse of power and rush to judgement, about the stubborn tendency to always want what we don’t have, and about how an easy determinism and a casual purposelessness leave us living lives suspended between anxiety and inaction. But the common thread running through all is a feeling of impermanence: this is an album about the swift passing of time, the unceasing rhythm of that clock whose swinging pendulum marks the moods and movements of any age, which humbles our greatest endeavours and endows every fleeting moment with a value beyond measure.

This project is funded in part by FACTOR, the Government of Canada, and Canada’s private radio broadcasters.

Founded by Trinidadian-Canadian Drew Gonsalves, Kobo Town is named after the historic neighborhood in Port-of-Spain where calypso was born. Kobo Town takes the intricate wordplay of Caribbean music and runs it through a 21st Century filter. In the world of Kobo Town calypso, roots reggae, and acoustic instrumentation meet innovative production techniques, social commentary and indie rock attitude. ... more

Bandcamp Daily  your guide to the world of Bandcamp